The contact between the Johannes Kepler School (JKS) and the Beautiful Gate Academy (BGA) in Salima exists since 2017. The objective of this partnership should be the joint learning about global topics as well as the intercultural exchange and the forming of international friendships.

take a look at the blog entries →

During the last four years, both school could get to know each other through letters and video calls. They showed each other their school buildings as well as the different school systems. Donations used to improve the practical visualization in the class were presented by the JKS in 2019. With posters, geographical maps, microscopes as well as water analyzing boxes, the JKS could support the teachers at the BGA. The library could also be rebuild using donations.

Members of the MASO have visited the school multiple times. Travels to meet each other in real life were arranged in 2020 but needed to be postponed for two years due to the Covid-19 pandemic. Gladly, the project could be brought back to life in 2022 where Malawian students already visited their German exchange partners in July and which will travel to Malawi in mid September the same year.

Germany is a mid-sized country in the heart of Europe and a member of the European Union. The 4th wealthiest country in the world has 83 million residents and a flourishing economy whilst not being without it’s issues. One of the main political as well as social difficulties may be the demographic change that there are more old than young people which results in problems with the current pension system.

For the young ones, school is obligatory for everyone for at least twelve years and generally free of charge. Contrary to many other countries, studying fees are also quite low – around 10€ per semester – which enables many who want to study to do so without a financial barrier.
Some of Germany’s sights like the Elb-Sandstein-Gebirge or the Spreewald are world-famous and events like the “Wacken” festival or the “Oktoberfest” attract millions of visitors each year.

Since 2007, the Malawi aids support organization (MASO) is active in Chenyama, a region near Salima. At first, HIV-testing and advice as well as medical support for AIDS contracted was the main focus but over the years, many additional projects with more of a social aspect were created.

A main part of our work is the Home-Based-Care program where we visit over 100 patients at home and support them with medicine, small things like dressing change or more general tasks like some housekeeping.

Due to donations and the initiative of the Johannes-Kepler-School we could create a preschool which consists of 3 classrooms, a small cooking-house as well as a playground. Here, about 150 children can be looked after, many of them being orphans or undernourished. Once a day, they get a warm and rich in protein meal.

Additional projects include a big medical and general plant garden, which is also used for trainings for the public, Illiteracy programs with 4 courses in the near by villages, the building of a primary school in a region which is currently cut of from education and the support of individual students who visit a secondary school. A local youth group is currently realized which includes sports options, open air theater and a youth guest house.

The support foundation accompanies the partnership between the two schools since the beginning and supports it not only financially but also by giving advice to the teachers and students participating.

If you want, you can take a look at the MASO-Website (auto-translated via Google) here (we don’t have any control over the translation). 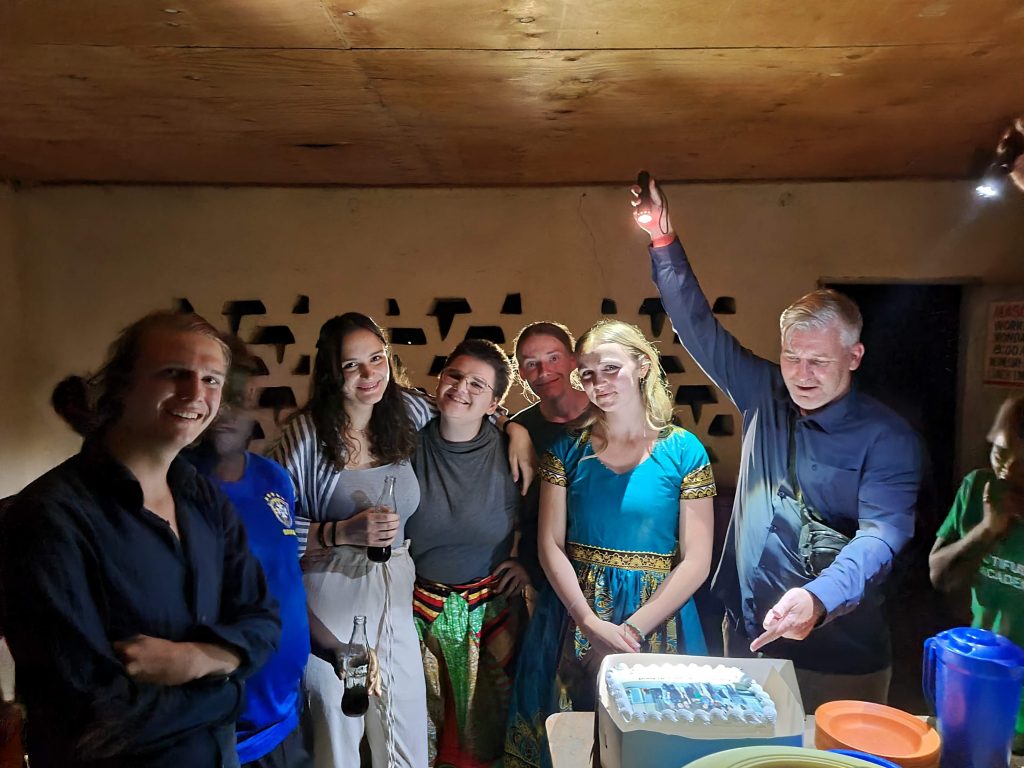 All good things come to an end!
Tanja
Today is the day of goodbyes and an unforgettable journey comes to an end. In…
Read More 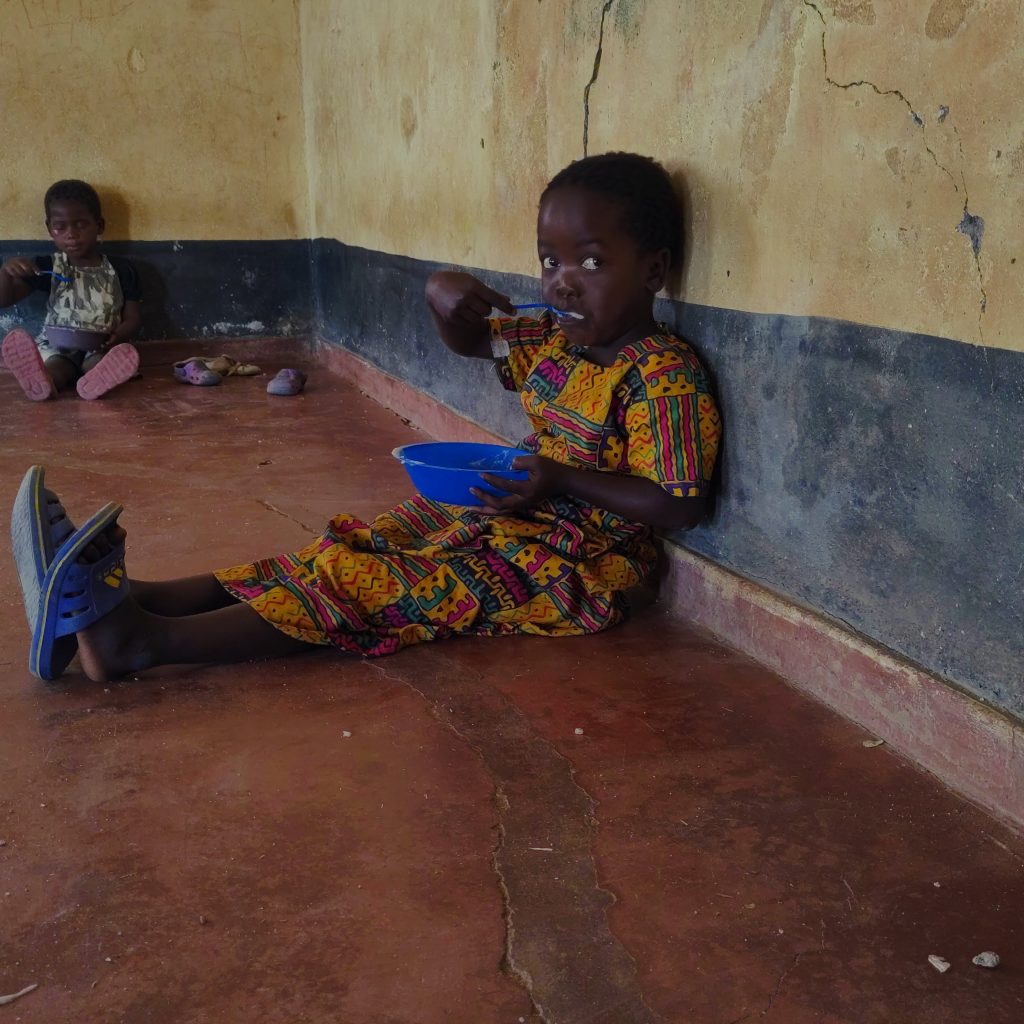 A very heartwarming day
Tanja
Today we went to the MASO station again, but this time there was a lot…
Read More

The last day
Shafi
We went to the lake with our friends. Lake was very nice to me as it looks smaller to me. It was my first day to me to see a small lake like that, I was able to see another side of the lake for that reason I was very excited. We rested for some minutes before we start swimming in the lake. We then get into the lake. I challenged my fellow friends that I want to cross the lake but I did not try to do so. We swim with my friends Justus, Theo, Matthews and I myself Shafi. My friend Matthew was scared and he wondered how I had no fear by going far away from shallow water. And I was very excited because I rode a small boat of a certain man. Then we went to Sylvie Mom house where we had to eat different foods….
Read More The monument trip
Quaraisha
We are back at kepler high school in Germany of course. So the first thing we did was attending an english lesson in grade 11, there the students asked some questions like what are your hobbies, how old are you and do you prefer Germany or Malawi. From there we went to the other class and we learnt physics. The fun parts were the experiments, then the class was over and we went in another grade which was grade 7c. There also was an english lesson but this one was realy fun and super cool. We were also being asked questions like in the other class. I found out that they have a class president and his vice which is super cool. I had alot of fun and it was great experience. After school we went to the monumet of the battle of nations, it was a nice place I…
Read More An ecological city tour
Porcia
Wednesday was a great day to remember because we learnt about the ecological footprint. It’s raining, so we wait under this tent In the morning Neele and I went to school at around 7 and half past 7. We attended her French class and it was really great although her teacher spoke French throughout and told Neele to be translating, what she was saying. It ́s not that she doesn’t understand English but she wanted to see if Neele was able to translate French into English. Secondly, we met with the other people and took part in the ecological footprint organisation. So we learnt that sustainability is important because once one cuts down trees he or she needs to replace them by planting another tree. That future generation should be able to use it for future use. We alsolearnt about chocolate and how the toxins that are used in phones…
Read More

Tuesday – trip to Berlin
Shafi
We went into Leipzig city with Justus where we get n the bus going to the train station. We met our friends at the main station and our teachers both from Johanns Kepler Hi xull and Beautiful Gate Academy teachers. After treating each other we started our journey to Berlin the Capital of German. I was very excited even a way to Berlin as I was looking outside Train through the window looked trees and landscape German. We reached the main station of Berlin in good time. The station has a well and beautiful building. I admired it and was very happy with it. We went into the city, we saw the parliament buildings which all are so beautiful. we saw main historical things including the burnt library, Friedric symboland a place where people were not allowed to cross during the war when the German was divided into two regions,…
Read More at kepler high school
Quaraisha
When we first reached the school i was very nervous. Many students were looking at me, I was very scared, you know everyone looking at you in a weird manner oviously I would be scared. From there we went into Tanja´s class in grade 11. There i met Pauline the cool girl, she was very frindly and lovely too. Then the teacher came in everyone was quiet and it was time for German lesson for 90 minutes one period. When the teacher was teaching i couldn´t understand a word because it was in their language and after some time the class was over and we went in another class which was grade 7. It was realy fun, everyone has to show the class what he or she knows to the class. But before visiting grade 7 the headteacher welcomed us in a very kind manner. She was lovely too. After…
Read More What we did on sunday
Matthew
On sunday, we went to the park called Clara-Zetkin-Park but our group lost the way as well as Porcia and Neele but finally we reached the park. There was different activities that we had, such as a game called “Man do not annoy you” in English and in germany language its called “Mensch ärger dich nicht”. We played volleyball too and we had alot of beautiful and delicious food for instance, apples, two different kinds of cakes, carote and the likes. We had also drinks. Our picknick at the park After eating, we went to an ecological faire nearby at the park. There were a lot of companies and institutions, showing how to be sustainable. Later everyone went home after Mrs. Wacker’s speech. In the evening we watched a movie at Justuses place. Thats all about sunday. Visiting the ecological faire
Read More 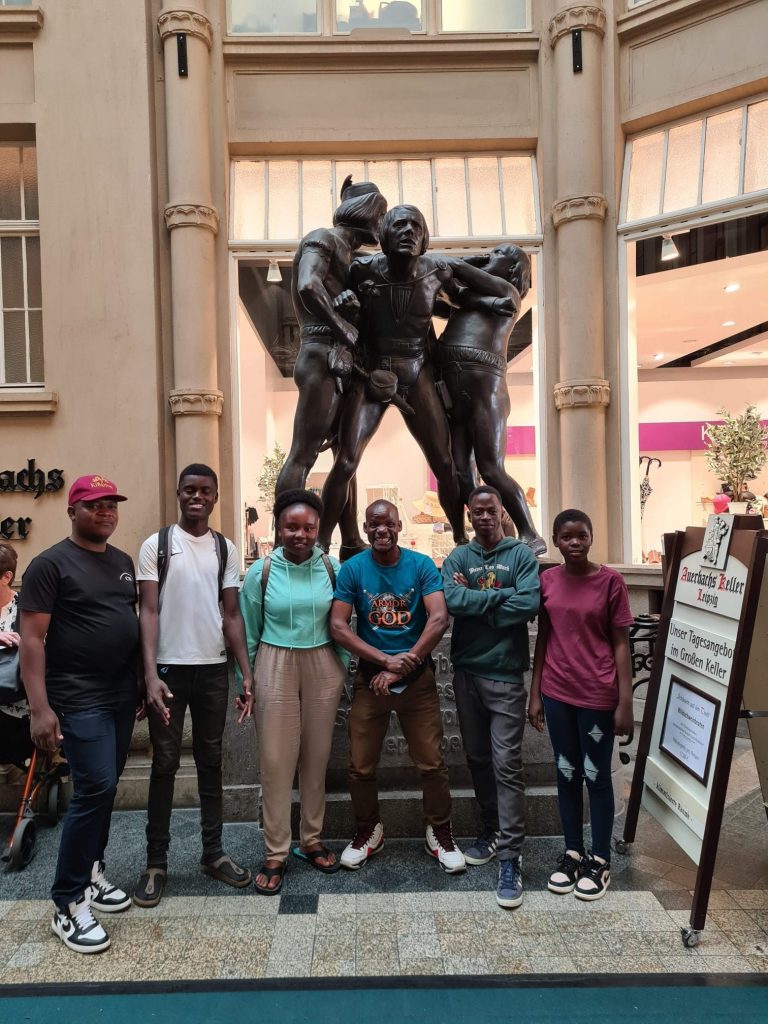 Experiencing the city of Leipzig
Porcia
Firstly, we visited the old town hall, it is said that the cornerstone was laid in the year 1556. It is still there until today and it is also a museum of the city history. The city hall was rebuilt after it was destroyed and now there has been built another one whereby there are two of them, but the old one still remains history till toady. Secondly, we discovered about the Thomas church. This was interesting because there is a statue of a man carrying something in his hands and his pocket is out meaning that he was poor and he did not have any money. His name is Johann Sebastian Bach, he was involved in a choir called “Thomanerchor” which is still famous and the Thomas church is there till toady. The “Mende” fountain is named after a girl named Pauline Mende which is so interesting because it…
Read More

Arrival in Leipzig
Tim
Our partners from Malawi arrived at the Leipzig central station after one and a half days of traveling. Tired but happy the got welcomed by their hosts. A great meal and a ready made bed now awaits them at their hosts home.
Read More